No that is not a typo in the title! Google Go was first released to the wild in 2009, exactly three years ago. Since then it has grown from an experimental language to production ready language with Go 1.

Go is available on all big platforms and architectures, be it Windows, Linux, MacOS, x86 or ARM. Being a happy owner of the Raspberry Pi, which uses an ARM chip, I tried building Go v1.0.3 and failed.

This error has been fixed in the repository and will very likely make it into Go 1.1. This article describes the steps for building and installing Go from source on the Raspberry Pi.

The Raspberry Pi comes with either 256 MB or 512 MB of memory. Compiling and linking the Go compiler can consume over 200 MB of RAM, so if you own the 256 MB version of the Pi, I recommend you adjust the memory split in favor of the main processor, at least while working with Go code. This also applies later when you compile Go programs, so keep that in mind!

The easiest way to adjust the memory split is by using the raspi-config utility: 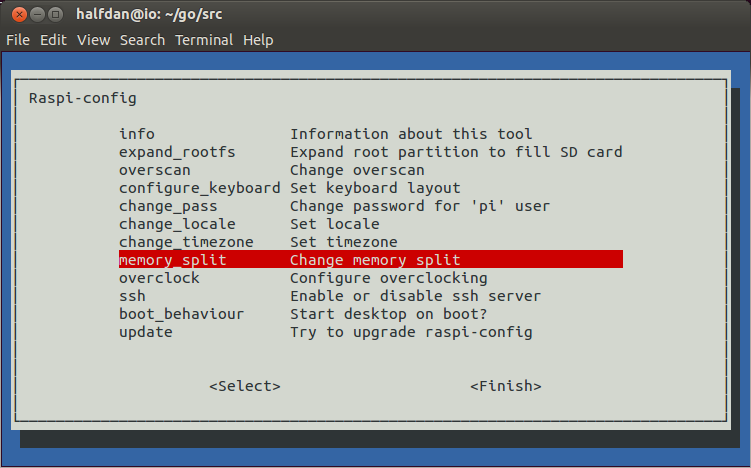 Raspbian has all the tools we need available through installable packages. To build Go from source we need Mercurial and a C compiler.

Now that all prerequisites are installed and the Pi is set up, it is time to clone the source and build Go!

This will clone the source into your home directory under the directory go.

Go comes with a number of bash scripts that you can use to build the source. The easiest and quickest way is to run the make.bash script in the src directory.

This will just compile the source and leave the final binaries in $HOME/go/bin. In case you want to run the full test suite you can either run all.bash (which will build and test Go) or just run test.bash after the initial build.

Adding go to your PATH

To run go directly from the command line you need to add it to the PATH. Add the following line into your .bashrc:

Go is installed and we can bake the Pi!

Lets hope Go is enjoying the cake! It is now up to you to explore the possibilities of having Go installed on the Raspberry Pi. Have a look at the additional resources to get an idea of what is possible with Go and the Raspberry Pi.

Did you already build something great for the Raspberry Pi with Go? Share it in the comments!